(No, we’re not just talking about alcohol.)

Did you know your liver is about the size of a football? The liver is mainly responsible for filtering blood that comes straight from the digestive tract, just before it passes it on to the rest of the body. It also helps to remove toxins from the bloodstream, which is why it’s important that you don’t overwhelm the liver with substances that can hinder these important functions, such as alcohol and added sugars.

But did you know that alcohol isn’t the only beverage that can do damage to your liver?

Here are a few drinking habits that could be wreaking havoc on your liver:

– If you’re a kid, drinking soda at least once weekly. 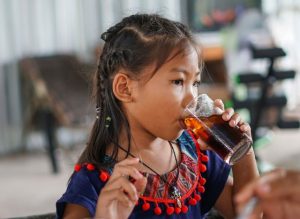 According to a 2017 study published in the Journal of Hepatology, 90% of the 271 obese children and adolescents that were included reported drinking soda and other sweetened beverages at least once a week. Liver biopsies revealed that 37.6% of the kids had a condition called nonalcoholic steatohepatitis (NASH), which is a form of nonalcoholic fatty liver disease (NAFLD).

Those with NASH experience fat buildup in the liver, which is accompanied by inflammation and liver cell damage. This can cause scarring in the liver, called cirrhosis, which can then lead to liver cancer. Researchers suggest that lowering children’s fructose intake may help to lower their risk of NASH and NAFLD.

Bottom line: Limiting kids’ consumption of soda and other sugary beverages may help to prevent the onset of detrimental liver conditions.

One perk of opting for diet soda over normal soda is that you skip out on all of the excess added sugar. However, one study suggests there is one major pitfall to going the sugar-free route. According to a 2008 study published in The Canadian Journal of Gastroenterology, people who drank Diet Coke were more likely to suffer from moderate to severe NAFLD.

Bottom line: Limit your intake of the diet stuff just as you would with its sugary counterpart.

– If you’re an adult or kid, drinking any type of soft drink.

If you look at the nutrition label on the back of a can produced by any of the top leading soda brands, you’ll more than likely see high fructose corn syrup (HFCS) listed as one of the top three ingredients. The hyper-sweet artificial sugar, derived from corn syrup, has been linked to various health problems, including obesity, diabetes, and heart disease. However, studies have also shown that high intake of HFCS can also trigger NAFLD, according to the National Institutes of Health. In fact, one such study revealed that mice who ate a diet rich in HFCS for long periods of time experienced a deterioration of their intestinal barrier.

Bottom line: The less HFCS you consume, the more you’ll reduce your risk of NAFLD and other poor health outcomes.