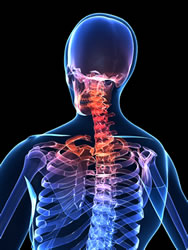 Whiplash is a non-medical term for a condition that occurs when the neck and head move rapidly forwards and backwards or, sideways, at a speed so fast our neck muscles are unable to stop the movement from happening. This sudden force results in the normal range of motion being exceeded and causes injury to the soft tissues (muscles, tendons and ligaments) of the neck. Classically, whiplash is associated with car accidents or, motor vehicle collisions (MVCs) but can also be caused by other injuries such as a fall on the ice and banging the head, sports injuries, as well as being assaulted, including “shaken baby syndrome.”

The History Of Whiplash. The term “Whiplash” was first coined in 1928 when pilots were injured by landing airplanes on air craft carriers in the ocean. Their heads were snapped forwards and back as they came to a sudden stop. There are many synonyms for the term “whiplash” including, but not limited to, cervical hyperextension injury, acceleration-deceleration syndrome, cervical sprain (meaning ligament injury) and cervical strain (meaning muscle / tendon injury). In spite of this, the term “whiplash” has continued to be used usually in reference to MVCs.

Why Whiplash Occurs. As noted previously, we cannot voluntarily stop our head from moving beyond the normal range of motion as it takes only about 500 milliseconds for whiplash to occur during a MVC, and we cannot voluntarily contract our neck muscles in less than 800-1000 msec. The confusing part about whiplash is that it can occur in low speed collisions such as 5-10 mph, sometimes more often than at speeds of 20 mph or more. The reason for this has to do with the vehicle absorbing the energy of the collision. At lower speeds, there is less crushing of the metal (less damage to the vehicle) and therefore, less of the energy from the collision is absorbed. The energy from the impact is then transferred to the contents inside the vehicle (that is, you)! This is technically called elastic deformity – when there is less damage to the car, more energy is transferred to the contents inside the car. When metal crushes, energy is absorbed and less energy affects the vehicle’s contents (technically called plastic deformity). This is exemplified by race cars. When they crash, they are made to break apart so the contents (the driver) is less jostled by the force of the collision. Sometimes, all that is left after the collision is the cage surrounding the driver.

Whiplash Symptoms. Symptoms can occur immediately or within minutes to hours after the initial injury. Also, less injured areas may be overshadowed initially by more seriously injured areas and may only “surface” after the more serious injured areas improve. The most common symptoms include neck pain, headaches, and limited neck movement (stiffness). Neck pain may radiate into the middle back area and/or down an arm. If arm pain is present, a pinched nerve is a distinct possibility. Also, mild brain injury can occur even when the head is not bumped or hit. These symptoms include difficulty staying on task, losing your place in the middle of thought or sentences and tiredness/fatigue. These symptoms often resolve within 6 weeks with a 40% chance of still hurting after 3 months, and 18% chance after 2 years. There is no reliable method to predict the outcome. Studies have shown that early mobilization and manipulation results in a better outcome than waiting for weeks or months to seek chiropractic treatment. The best results are found by obtaining prompt chiropractic care.

Our office in Redondo Beach, CA has been helping the residents of Hermosa Beach, Manhattan Beach, Redondo Beach, El Segundo, Torrance, Palos Verdes and other nearby cities experience the amazing benefits of chiropractic and wellness so they can enjoy life and health once again without drugs and surgery.