Diet issues across all American demographics are now considered a national security threat, according to a study by the Federal Nutrition Research Advisory Group released July 20, 2020. 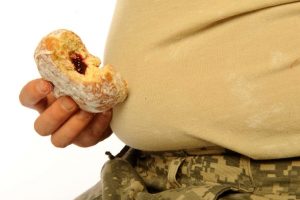 Poor diet is now the main cause of illnesses in America, with nutrition issues linked to the deaths of more than half a million people every year, according to the study’s authors and reported by CNN.

One goal of the study was to research the “mounting diet-related health burdens facing our nation and corresponding economic, health equity, national security, and sustainability implications,” the abstract reads. It also discusses food issues related to the current pandemic.

“The coronavirus disease 2019 (COVID-19) outbreak has further laid bare these strains, including food insecurity, major diet-related comorbidities for poor outcomes from COVID-19 such as diabetes, hypertension, and obesity, and insufficient surveillance on and coordination of our food system,” according to the paper.

And the situation regarding military-age Americans is dire and growing worse.

“While nearly one-third of 17-to-24-year-olds are too overweight to qualify for military service, the problem starts much earlier,” according to a 2018 report called Unhealthy and Unprepared. “Children as young as two are experiencing rising obesity rates, which increase with age. Currently, 42 percent of teens between the ages of 16 and 19 are overweight.”

“The obesity issue is the most troubling because the trend is going in the wrong direction,” then-Maj. Gen. Allen Batschelet said in 2015. “We think by 2020 it could be as high as 50 percent, which means only 2 in 10 would qualify to join the Army.”

Overall, the rate of obese service members is up to 17 percent, according to the August 2019 Medical Surveillance Monthly Report, with the Navy as the fattest and Marine Corps as the fittest.

In the Navy 22 percent of sailors are obese, with the Air Force following at 18 percent, Army at 17 percent, and Marines at 8 percent.