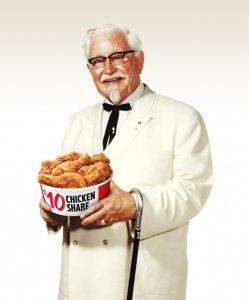 Colonel Sanders’ story involves more than just fried chicken. Not many people know the details of his life story.

Let me tell you a little more about him.

At the age of 66, after “retiring,” Colonel Sanders decided he wanted to go into the “chicken business.”

He had what he firmly believed was the best fried chicken recipe in the world.

He started out by going to local restaurants and offering the owners his recipe if they would give him just 5% of their increased fried chicken sales. He got no takers, so he went “on the road.”

From town to town, all across the country, he traveled in his old car, pitching his recipe. At times he was so broke that he actually lived in his old car. He did this for two years and he still had no takers.

Despite being turned down over 2000 times, he never gave up. Soon after all those rejections, someone did buy his recipe and it caught on. Well, most of you know the rest of the story. Colonel Sanders become the multi-millionaire of “Kentucky Fried Chicken” and a businessman famous for his wisdom and tenacity. And this was all after he “retired.”

He lived to be 96 years old. When asked how he remained so active in his later years, Colonel Sanders said that he had “a secret.” He told the reporter that he had seen his chiropractor once a week for 56 years.