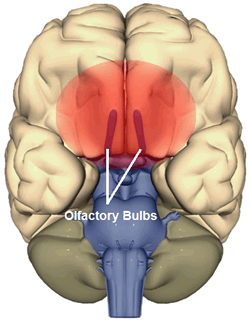 Injuries to the olfactory bulb or the frontal area of the brain may result in alterations in the sense of smell.

Previous studies have noted that traumatic brain injury (TBI) can cause changes in olfactory function, due to damage to the olfactory bulb and/or to the fronto-temporal brain areas that control the sense of smell. The purpose of this study conducted at University Hospital in Maastricht (Netherlands) was to determine the incidence of olfactory dysfunction present 2 weeks after mild traumatic brain injury (MTBI). The study was conducted between October 1996 and December 1998, with 61 male and 50 female subjects whose median age was 34.

To be included, study subjects must have presented in the emergency room within 6 hours of the original injury, and been diagnosed with MTBI. In this study, MTBI was defined as causing PTA (post trauma amnesia) of less than 1 hour, and an initial loss of consciousness of less than 15 minutes; a Glascow Coma scale score of 14 or 15 on presentation, and no focal neurological signs. Those with histories of past TBI, alcohol abuse, and psychiatric disorders were excluded from the study.

Two weeks after the initial MTBI, olfactory function (sense of smell) was assessed using a “Hyposmia Utility Kit,” that utilized Phenyl methyl Ethyl Carbinol (PMEC) in different concentrations (the subject chose between the bottle with the PMEC concentration and one with plain water, to the weakest concentration they were able to discern a difference). Normal thresholds range from –25 to +25 dS; 30-55 dS is considered hyposmia (reduced sense of smell), and above 55 dS indicates no olfactory function for the odor.

One fourth of the patients in the study had impaired olfactory function two weeks after MTBI:  24 (22%) experienced hyposmia (thresholds in the 30-55 dS range) and five patients (4%) experienced anosmia, or a complete loss of smell (threshold above 55 dS).
In a normal population without traumatic brain injury, hyposmia is present in 2%, and anosmia is present in 0.2% (per Olfacto Labs data). The study concludes that MTBI causes damage to the sense of smell, through the olfactory nerve of the frontal-cortical structures.

According to this preliminary study, a significant number of MTBI patients exhibit olfactory dysfunction. Patients with alterations in the sense of smell should be evaluated for head injury.